ZSL London Zoo’s three lions showed their support for the England team by revealing their own football skills this morning (Thursday 12 June) as the World Cup kicks off.

The three Asian lionesses, Ruby, five, and twins Heidi and Indi, three, were given patriotic footballs stuffed with meaty treats to show their support for the England team ahead of their first game on Saturday evening.

Lions have been mascots on England football shirts since 1872, but Asian lions are today facing a battle for survival, with only 400 left in the wild. There’s a very real chance that this iconic symbol of the English team could become a thing of the past, but the Zoological Society of London (ZSL) is working to prevent that with its new Lions400 campaign.

This ambitious public fundraising project aims to raise £5.7m for the endangered Asian lion, and will include creating a new state-of-the-art breeding centre and exhibit at the zoo, as well as the extension of vital conservation work in India.

Senior keeper, Paul Kybett, said “The keepers are all keen football fans and we’re hoping that with ZSL London Zoo’s pride of lions roaring them on, the England team will be bringing home the World Cup this summer.

“As the three lions at the Zoo and the England team embark on their different campaigns, we’re hoping the country will get behind Lions400 as well as the football and help us save this iconic species so future teams can wear them with pride on their shirts.”The Zoo’s lions were given special footballs as part of their daily enrichment which is designed to inspire their natural curiosity, while the England team will hopefully use theirs to succeed in Brazil. 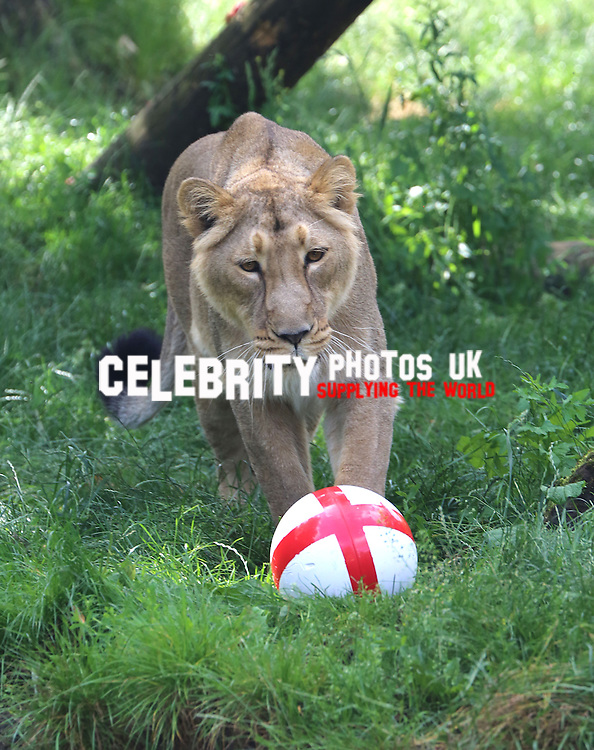